It has indeed been a while since the last post. Your Microburin has still been dogged by bouts of ill-health and while the mind is largely mended, the meds have caused trouble with a stressed immune system. However, onward and upwards.

The time since last posting has not been short of media coverage of the Mesolithic. The most recent headline is the publication, as two volumes, of the most recent (and rescue) fieldwork and research at Star Carr. The reports are open-access free-to-download, or to purchase for just under £100. This is a remarkable achievement and congratulations go to Nicky Milner and the entire multi-disciplinary project team (including Dr Harry R on fungi). Warm celebration surrounds now-Dr Charlotte Rowley, University of York, one of Star Carr’s lithics gurus, viva voce.

Exciting work continues offshore in mapping and investigating Doggerland and, for an example of best practices in community archaeology, the Mesolithic Deeside Project (Aberdenshire, Scotland). There have also been influential, if not game-changing, reports about DNA and isotope research findings related to the Mesolithic period, earlier hominin periods too, transitions to the Neolithic, and later prehistory such as the Beaker period – adding insights that we could not have imagined until very recently. Science wins.

Speaking of ice, and fire as the arson season commences on Teesside, there’s been a great deal of progress with the ICE AND FIRE rescue archaeology project in the Eston Hills, Redcar & Cleveland, North Yorkshire. The 2017 season finds have been catalogued and some enigmatic, unusual artefacts will undergo further scientific research. The HLF-funded project in 2017, its first full season of geophysical surveys, test-pit excavations and pollen-coring, has exceeded all expectations.

Features include three hearths or fire-pits, a posthole with a potsherd in the fill, many flint artefacts and a radiocarbon date from the edge of our wetland – the edge and not yet the centre – dates back at least to the Bronze  Age! We hope that cores from the centre of the wetland will take our narrative back to the end of the last Ice Age. There is still the prospect that it may preserve organic material such as wood, antler and bone (if anaerobic) given that we have intense human activity directly around it, from the Early Mesolithic to the Iron Age, with particularly strong Neolithic signatures. We have now published the free-to-download 2018 Interim Report, lavishly illustrated, which places the project and our findings so far into a regional perspective. 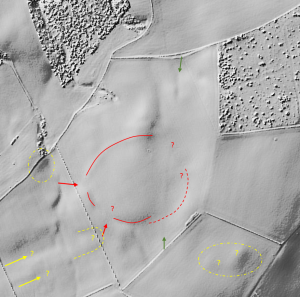 What’s more, we have LiDAR and Google Earth images for what looks to be a previously unrecorded prehistoric monument, or indeed monuments aplenty, close to the Eston Hills.

Image | Environment Agency LiDAR laser-imaging has revealed a large circular feature, more than 100m diameter and, in addition to a couple of scheduled round barrows, a possible linear feature too (yellow). They show as soil and crop marks in both winter and summer on arable land. 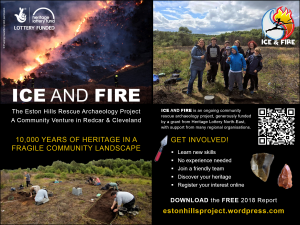 In addition to the report, we’re pleased to announce that printed A3-size posters will be available for distribution by the end of April. The project team will deliver copies to schools, colleges, museums, libraries and other community outlets. It is worth emphasising that we do still have a few libraries and museums open – celebrate the third sector of community volunteers where professional staff have been made redundant. 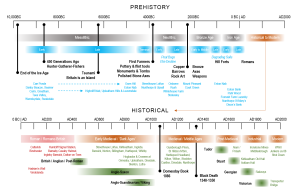 We have also added this and a Timeline Chart to our Publications webpage. The chart is included in the report. We’re seeking charitable funding (£2000) from regional and national archaeological and historical societies, as well as commercial businesses in Redcar & Cleveland (Teesside, North-East England), to print and distribute our 2018 report across the community. Regrettably, and despite huge progress across local government, emergency services and community agencies, the 2018 fire-season has commenced together with other antisocial behaviour, illegal offroaders and more. We need our message about what is at risk – in addition to human lives – to go viral. 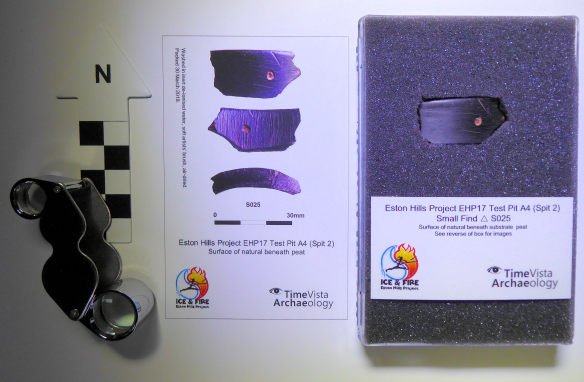 A remarkable fragment of oil-shale or cannel coal, much like Whitby jet, from one of our 2017 excavated test pits. It is most likely prehistoric possibly early Bronze Age Beaker period (c. 2000 BC), or Iron Age to Roman-British. Whether the rim of a vessel, or an arm band or bracelet, around 90mm diameter, it is extremely rare. Only one other such vessel is known in Britain (Devon) and if an armband, it is of a very unusual form. The inner surface has been carefully shaped, more than likely with a flint blade. The hole is drilled either for repair or suspension. This would seem to have been a highly valued item or heirloom. Its next stop will be the National Museum of Scotland for examination by leading experts in this material and artefact type.

We would like to create a museum display of the amazing 2017 finds, as well as hands-on displays for schools with replica, artisan-crafted pottery, flint tools and prehistoric bronze artefacts such as daggers, axes and arrows. Conversations are underway.

Earlier in the year Microburin was delighted to attend the Thornton-le-Street Roads To The Past kickoff weekend in North Yorkshire, hosted by friends at Solstice Heritage LLP, to examine their lithics finds and provide an introduction to prehistoric lithics workshop – with the luxury of home-made cakes. What’s remarkable is that on day one of their field-walking they recovered a fantastic flint-and-chert assemblage that takes us back to the Mesolithic, as well as later periods. In May I’ll be returning to deliver two more workshops to enable the community group to be self-sufficient in first level recording and identification of their finds. There assuredly is much more to come in those river-side fields! The hint is always in wetlands.

Lastly for now, and sadly much delayed, I am completing a lithics chapter for the Street House Farm Project 2010-11 season with, yet again, a rich suite of flints that demonstrate thousands of years of persistence in a very special place. In the last two years we now have a series of phased Early Neolithic (around 3700 BC or earlier) domestic structures with all the material culture to match. Radiocarbon-dated hazelnuts rule!

Signing off for now. All good wishes,

There are noises that suggest the delayed Charting Chipeling monograph about the archaeology of the Kiplin Estate in North Yorkshire may be heading towards print presses soon. In the meantime, and with Jim Brightman’s kind permission, here is the chapter on Lithics analysis and interpretation together with the full bibliography. I’m also pleased to have contributed to three other chapters, with Jim, on the excavations.

On a personal note, things have been a bit on the quiet side much of this year due to some significant health issues. I’m glad to say the slow road to recovery is being travelled.

The Lithic Studies Society is holding a day conference in Oxford on Sunday 19 November. The theme is a hot topic with a great line-up of speakers who will present their experiences of gleaning valuable new insights from legacy lithics collections.

I’m booked, so hopefully see you there!

Update | I have added a Reporting Finds page to this blogsite. The guidance has been adopted by the Prehistoric Society on their Facebook page as a new rule of engagement.

After last week’s post about a walkover survey of a Mesolithic landscape in Yorkshire, something I do annually with permissions—and about the persisting evidence of unrecorded flint collecting¹—I’m glad to say that just enough has been left behind since 2013-14² to be able to tell some kind of story. Stones tell stories—but context is key!

The image here is rather rough-and-ready but shows, after gentle cleaning, 62 flints from the different disturbance locations, ahead of detailed analysis, cataloguing, HER submission, and archiving in a local museum. Very detailed grid references (GPS) have also been recorded. This is clearly a very small collection, but sits within a much larger archive, in the context of recent recording and volunteer regimes as part of a Historic England project, and the ongoing random activities of some participant(s) for their own various motives or habits.

Some highlights amongst the sixty-two include:

However, we don’t know what the collector(s) have removed, including any possible Early Mesolithic artefacts—which are extremely uncommon in this area and are usually broad-blade microliths (projectiles)—or indeed early Neolithic artefacts such as leaf-shaped arrowheads, attractive to collectors. We’re in an area where the Mesolithic-Neolithic transition (the overlap) hints at being potentially later than other northern locations.

The image above was found on the Internet some years ago, posted under a pseudonym, and shows a collector’s Early Mesolithic microliths from Glaisdale. There were also images of microscalene triangles and backed bladelet forms. The area was frequently visited by collectors throughout the 20th century until recent work by Natural England to re-vegetate and re-wet an extensively eroded moorland area.

The saddest news is that many 20th century collections, and very extensive collections amounting to tens-of-thousands of finds (if not more), ultimately ended up in land fills after the collectors’ deaths. Some ended up in museums, but mixed-up and not well documented, often the result ‘of a weekend walk’ over many years. There are a number of extensive private collections today, some known, many suspected, that may end up with a similar destiny—I know of at least four, filling garage-sized spaces that would take a generation to process. Even with recent developments in best-practice recording advice (PAS, HER, MoRPHE, CIfA and otherwise) by virtue of standards frameworks, an incredible amount of data—research data—remains out of reach, off-record and hence at risk.

The Narrative So Far

I’ll post more, with images, when the analysis and cataloguing is complete.

¹ Evidence comprises regular sightings by the gamekeepers and farmers of at least one collector, the same gentleman each time (he used to quote my name as a legitimiser), known to leave small piles of debitage (taking the tools) and characteristic footprint patterns in all the eroding or disturbed areas where lithics are revealed. Some of his finds have been summarily recorded in the past but lack specific provenances in many cases.
² When the shooting butts and tracks were constructed.

The extraordinary James Dilley @ancientcraftUK is working through multi-period replica assemblages for my lithics training workshops this year, and beyond. The workshops deal with the archaeological aspects of lithic assemblages—chronological trends, research questions, technology, typology, identification, function, field archaeology best practices, analysis, recording and interpretation. The teaching materials also include other material culture associations, such as ceramics courtesy of Graham Taylor @pottedhistory and Bronze Age artefacts by Neil Burridge. 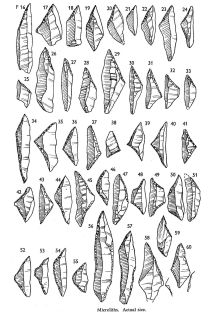 Selecting the correct pottery and lithic types to illustrate typological and material culture changes through prehistory. The pottery here is early Neolithic Grimston Ware from Yorkshire (c. 3800-3500 BC) and Early Mesolithic microlith flints from Star Carr (c. 8770-8460 BC).

What’s particularly useful in the expert knapping that James is undertaking is that each of the four period-based assemblages will be near complete, or at least a representative sample of coherent reduction sequences and artefact manufacture. James is also going to intentionally break some pieces.

The Reality of Bias

In reality, in the field:

With permission from the organising team, I’m pleased to announce that registration is now open for this conference. It brings together lithic researchers from all aspects of the discipline—with a particular focus on new and current approaches to lithics—and aims to discuss a variety of innovative methods of lithic analysis.

Manchester is rather busy this week and so please do book accommodation early. Both venues are on the university campus (close to Oxford Road) and generally a fair distance from hotels. Maps can be downloaded from the website. See you there!