In the summers of 2015 the Stone Age Park Dithmarschen in Albersdorf (Germany) organized a Stone Age Living Project in the area of the newly built 2014 “Mesolithic Settlement” site, in the form of both an educational programme and as an experiment. The activities and outputs (used tools and established structures) were scientifically documented by archaeologists from the Archaeological Department of the University of Exeter, England, as partner of the OpenArch-project. The scientific results will be published by Exeter, the detailed documentation will be published by the Stone Age Park in form of a magazine and a brochure.

The aim of the project was to reconstruct the everyday life of hunter-gatherers of Mesolithic Northern Europe around 5000 BC by doing an authentic as possible life experiment with skilled re-enactors and experimental archaeologists, in order to gain a new type of insight of how life might have been at that time.

◊ Imagined realities in the portrayal and investigation of the British Mesolithic |

“Fiction can be a powerful way of imagining the past. Examining how the Mesolithic has been communicated is part of my PhD research into public perceptions of the Mesolithic. The starting point for this paper is the words of novelist Margaret Elphinstone: ‘In the blank spaces between the words of archaeological narrative lie the buried kernels of all the forgotten stories‘. This paper will explore the dissonance between academic portrayals of the Mesolithic and portrayals of the period in fictional novels and short stories. I will look at the range of narrative elements presented: characters in settings carrying out actions which may be affected by external happenings.

Whereas archaeology of the Mesolithic is good at conveying settings and happenings, I will argue that it is to fiction that we must turn for an exploration of characters and actions. This in turn should deliver a better appreciation of what we should be seeking to recover through our research. We need to move beyond seeing Mesolithic people as hunter-gatherers and towards a more rounded view of them as people, and to think how we might recover aspects of life higher up Hawkes’s ladder of inference than the purely technological and economic.” 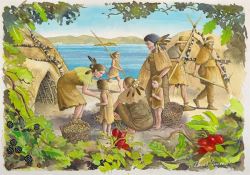 Val Dean talks about Cramond (near Edinburgh) in the Mesolithic era (c.10,000 – 4500 BC), exploring what life was like for the population at this time; what people ate, how they lived, the tools they used and what traces remain for archaeologists to explore.

Get behind the scenes with archaeologists and scientists as they explore 10,000 years of human history on the Mar Lodge Estate – uncover the links between tiny flint tools, climate change and pit-roast venison.

The Mesolithic settlement of Star Carr in North Yorkshire has fascinated archaeologists for decades. Nicky Milner and her digging team from York University are embarking on their final ever excavation on site to unlock the secrets of this mysterious landscape. They’ve been filming every moment of discovery to give us a glimpse into our ancient past. 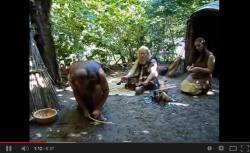 Six and a half minutes of atmospheric Mesolithic fire-making at the archaeological open-air museum Oerlinghausen (despite there being a fire already lit behind!). Werner is using a bow-and-drill and then tinder. Certain fungi, such as horse’s hoof (Fomes fomentarius) discovered at Star Carr, could also be used as tinder and to preserve smouldering embers while on the move, although this video demonstrates how quickly a fire can be ignited with dry materials. One can confidently predict that flint and iron pyrites would also have been used to generate sparks.

Five minutes and thirty seconds of 6,000 years that represent the Mesolithic—after the retreat of the glaciers to the onset of farming, domestication,sedentism, secondary milky products and ceramics. 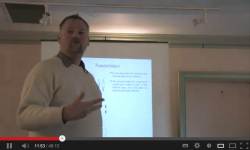 This lecture focuses on the English–Scottish border region but provides an excellent overview of knowledge, challenges and opportunities. As well as tying material culture into climatic change events, Kristian also provides definitions and explanations for some material culture nomenclature in a European context, like Hamburgian, Creswellian, etc. | 48 min Jan 2011

Dr Warren is a College Lecturer in the School of Archaeology, University College Dublin, he was appointed in 2002 to expand the School’s practical teaching skills and provide a specialism in early prehistory. His primary research is on the early prehistoric archaeology of Ireland and Britain in European context. He focuses on hunter-gatherers and the adoption of agriculture (Mesolithic & Neolithic).

Archaeologists have created a 3D visualisation of a whole prehistoric landscape now submerged 20 metres under the English Channel, and 8 miles off the West Sussex coast. This is how they believe it may have looked over 8000 years ago, based upon environmental and geophysical surveys; an estuary populated by families living from the river, sea and land; a river surrounded by salt marsh and forest | 4m 16s (with audio) 2006

Here’s a great short video fly-through the Mesolithic landscape of Lake Flixton, Vale of Pickering, North Yorkshire, England. Ongoing excavations at Star Carr and Flixton Island are the current manifestation of research since the 1950s. This CGI video incorporates  recordings of what the post-glacial landscape may have sounded like 11,000 years ago, when hunter-gatherers shared their environment with wild ox, bears, beavers, horses, boar, wolves and a hazelnut or two | 1m 35s (silent intro) 2013

“The model is based on pollen cores and archaeological excavations (including the currently active ones). It was created for the Yorkshire Museum’s new ‘Prehistoric Yorkshire’ exhibition in partnership with members of the Star Carr Project at the University of York Department of Archaeology. Sound design is by Jon Hughes.”