This informative article by Jake Rowland (Digital Digging) offers insights into the design, construction and use of the mesolithic bow discovered at Holmegaard (Holmegårds Mose) in Denmark, dated to around 7000 BC. Two bows were discovered in 1944, one complete, and are now in the Nationalmuseet, Copenhagen.

“For our Mesolithic ancestors, the effectiveness of the stone tools used by the bowyer who made original Holmegaard bow couldn’t be measured by how much wood they removed or how easy they were to use, ultimately it came down to the effectiveness of the bow itself.  It wasn’t something made for recreation: it represented the survival of an entire people. It was the tool that put food on the table and ensured the longevity of our Mesolithic ancestor’s survival.”

Jake takes us through each of the steps, including the lithic (flint) technology brought to bear – and not without some damage to his adze which makes for interesting testing against our lithic artefactual records. He makes good observations about the effectiveness of flint versus chert (adze) and scrapers versus blades. 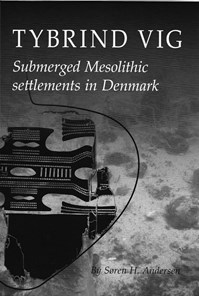 Having recently completed a round trip by train from London to Copenhagen via Hamburg, I’d love to share some of the highlights from the outstanding—content, preservation and display—early prehistory at the Nationalmuseet in Copenhagen (Danish | English). It’s probably the best Mesolithic exhibition I have seen and I can but urge a visit if you have not yet been.

Between The Bogs and The Sea

The exceptional preservation of organic materials in Denmark (also northern Germany, Poland, the Netherlands, southerm Scandinavia and Baltics)—including human beings, clothing and artefacts—relies on two factors: (a) the rich, wet, anaerobic conditions in their fast-disappearing peat bogs; (b) that many Upper Palaeolithic and Mesolithic activity areas now sit below sea level, a reflection of significant sea level rises after the last glaciation (although some land in the west if Jutland has risen by 50-60m after the weight of ice was removed, and continues to rise very gradually, as in Scotland—although southern England is still sinking).

We do have similar preservation in the UK, but far less frequent. Sites such as Star Carr & Flixton, Uxbridge, Thatcham, Bouldnor, Stainton West, Amesbury and Goldcliff East are/were rare survivals. Modern land drainage, development, together with industrial-scale agriculture threaten to destroy the tiny fraction that might yet remain. Star Carr will be (organically) gone, dissolved in acid or dried out within our generation, after 10,000 years in soggy peace. Star Carr 2010 pictured ↑

If you’re interested in the travel itinerary, briefly, and it is well worth doing by train, here’s a rough summary. I used the Deutsche Bahn website (timetables) and then called the UK DB office to book everything, and they were able to find the best fares. There’s also some excellent advice on the brilliant website Seat61 that includes other options such as a ferry from the UK and the Köln or Hamburg sleeper trains to Copenhagen.

Some panorama views to tempt you – more below too. L to R | The Vig aurochs, Amber carvings and pendants, the dugout boat from Broksø (Early Neolithic) →

Pictures | Click to enlarge | Taken in “museum mode” without flash – sorry for the quality. This is a selection only since there’s so much more in the museum, all compelling. The Bronze and Iron Age collections are particularly disturbing, given the degree of preservation (with often palpable human violence, and nice wool costumes).

Like archaeology in most other countries, Denmark’s is littered with “Cultures” or “Techno-complexes” derived from 19th and early 20th Century attempts to rationalise (and typologise) material culture—artefacts and common feature traits such as burial practices or settlement types—against a chronological “evolution”. Cultures, in this sense, are groups of like traits usually named after a “type site” or region. So, for example, we have the Creswellian (after Creswell Crags in Derbyshire) as the type site for upper Palaeolithic, late glacial lithics and bone & antler artefacts. Here’s my rough attempt at unraveling Denmark’s culturescape:

The Tåderup Elk drowned while being hunted around 6700 BC | Early flint arrowheads (Hamburgian and Ahrensburgian – compare with the Orkney examples above | Antler barbed points (upper group retain their flint barbs) | 8,000 years of arrowheads and microliths ↓

And Finally into the Neolithic

Some amber bling, a little trepanation to relieve pressure, signs of violence (an arrowhead in the sternum and a hole in the head) ↓

A bit of reading

Great story out this week. Decorated and painted paddles dating back to the Ertebølle “culture”—late Mesolithic hunter-gatherer-fisher—have recently been found in Horsens Fjord, Denmark. They were being damaged by strong ocean currents.

“The indispensable dugouts enabled the Ertebølle people to travel far and wide. They could even travel across ice in winter, so it was probably not uncommon for them to meet people of foreign origin.”

The paddles have been Carbon-14 dated to around 4700-4540 BC, the Middle period of the Danish Ertebølle period.

“The painted paddle blades bear witness to the decorations and colours which have undoubtedly been a regular part of everyday life in the Stone Age, but of which we only get the occasional glimpse.”