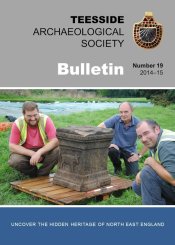 While my head is down in editorial work – Teesside Archaeological Society’s annual Bulletin journal with 70 pages of regional wonder and CBA Yorkshire’s FORUM YORKSHIRE archaeological journal volume 3, my last as editor – I came across the AHRC-funded project “Neolithic Stepping Stones”, June 2011 to September 2014.

This builds on recent discoveries and more prospecting along the western coast of the British Isles and includes Late Mesolithic microliths recently discovered on the Isles of Scilly:

Isles of Scilly | Neolithic Stepping Stones Project (University of Reading, AHRC)
Stepping stones to the Neolithic: Islands, maritime connectivity and the ‘western seaways’ of Britain, 5000-3500 BC’ looked to five island groups and the surrounding seas for answers. These were the Channel Islands, Isles of Scilly, Isle of Man, Outer Hebrides and Orkney. “Another exciting find came from the Isles of Scilly dig, which unearthed a stash of around 50 microliths, tiny flint tools from the Mesolithic (pre-Neolithic) era. Rather than being of British design, these are in Belgian and northern French style. “That was very unexpected,” says Garrow. “It tells us that people were sailing between northern France, Belgium and the Isles of Scilly around 6000 BC. It’s a very good sign of pre-Neolithic maritime contact.”

Another outcome of the project is a book co-authored by Dr Garrow, Dr Sturt and post-doctoral researcher Dr Hugo Anderson-Whymark. ‘Continental connections: exploring cross-channel relationships from the Mesolithic to the Iron Age’ (Oxbow) will be published by March 2015.

One of the 57 Mesolithic microliths found at Old Quay in 2013 (photo: Hugo Anderson-Whymark).

The team have also produced a series of web resources drawing on the research, including a western seaways navigation game that works within Google Earth. And they used social media throughout the project – having such geographically dispersed participants made Twitter the perfect way to transmit updates.

Microburin’s Sites and Finds page has also been updated.