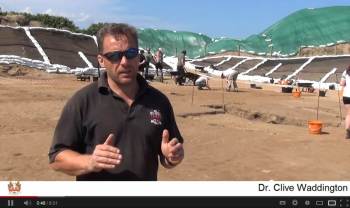 An ongoing rescue project is taking place in Northumberland where coastal erosion has revealed a Bronze Age “cemetery” burial cairn and evidence back to the Mesolithic. There are flints for sure but also antler and hundreds of preserved footprints in the peat beneath the present beach dated to over 7,000 years ago—adults, children and animals.

More media coverage is promised over the coming weeks, but here’s a great 8 minute video hosted by the inimitable Clive Waddington of Archaeological Research Services Ltd. This is a huge community project with more than 150 local volunteers and over 300 school children involved, supported by the Heritage Lottery Fund, Northumberland Wildlife Trust, Newcastle University, UK Coal and The Leader Project. Clive is well-known for the excavations of a Mesolithic house at Howick, Northumberland—one of the earliest Late Mesolithic structures in Britain, occupied from about 7800 cal BC, repaired and rebuilt over many generations. Will they find similar at Low Hauxley?